I walked in the door, just getting home from work, to find a slightly stressed out Graham, “pick up was a little drama tonight!”

Apparently, Graham witnessed the tail end of a scramble between Alaire and her ol’ buddy Andrew. Who’s Andrew? Alaire and Andrew have been in class together since they were 10 monthly old. Their relationship quite resembles brother and sister; they know exactly what buttons to push to throw one another into a tizzy. Also, Andrew loves to give Alaire hugs and in the process tends to overwhelm and frustrate her. She uses her words to decline the affection, but Andrew is persistent.

Graham and I adore Andrew. He has bright red hair and always wants to give us hugs and kisses. On several occasions, he has referred to Graham as Daddy. Now, Graham assures me he has no idea why…but we won’t go there 🙂 He also frequently compliments me on my shoes. No seriously, the kid says things like, “I like your shoes, they are sparkly today!”

Anyway, back to our story. Andrew bumped into Alaire with some sort of toy and it was all she could take. Alaire clocked him. And Andrew? Well, his nose started gushing. Graham said it was quite a scene as the teachers worked to clean him up and stop the bleeding.

On the drive home, as Alaire got her talking to, Graham asked why she hit Andrew, her response? “Dad, I used my powers!”

Well. At least we can take comfort that for Alaire, No MEANS NO! 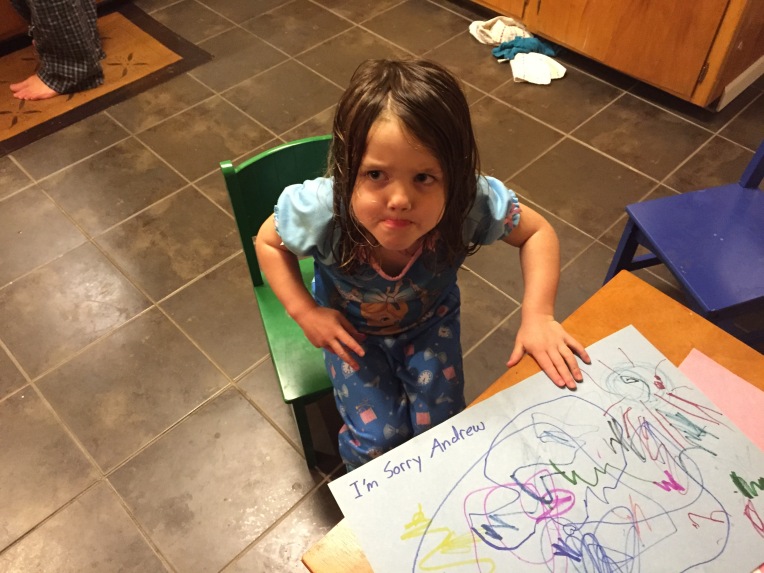